What did David Crockett see in the woods near Nacogdoches in 1836?

Here is a little-known tale about arguably the most well-known of the Alamo freedom fighters: David (Davy) Crockett. Crockett, who had served as both a Tennessee State Representative (1821-1823) and a U.S. Congressman (1827-1835) had declared himself done with politics and was pondering what to do with the next phase of his life.

It was at some point soon after this that things got strange for Crockett. In a letter addressed to his brother-in-law, Burgin, Crockett detailed the following experience:

“William and I were pushing through some thicket, clearing the way, when I sat down to mop my brow. I sat for a spell, watching as William made his good and fine progress. I removed my boots and sat with my rations, thinking the afternoon a fine time to lunch. As the birds whistled and chirped, and I ate my small and meager ration, I tapped my axe upon the opposite end of the felled tree I rested upon.

“Whether it was the axe’s disturbance or possibly the heat of the sun which caused an apparition to slowly form in front of my eyes, I know not. As a Christian man, I swear to you, Abe, that what spirit came upon me was the shape and shade of a large ape man, the likes we might expect among the more bellicose and hostile Indian tribes in the Territories. The shade formed into the most deformed and ugly countenance. Covered in wild hair, with small and needling eyes, large broken rows of teeth, and the height of three foundlings, I spit upon the ground the bread I was eating.

“The monster then addressed a warning to me. Abner, it told me to return from Texas, to flee this Fort and to abandon this lost cause. When I began to question this, the creature spread upon the wind like the morning steam swirls off a frog pond. I swear to you, Abner, that whatever meat or sausage disagreed with me that afternoon, I swore off all beef and hog for a day or so afterward.”

Less than six months after the writing of this letter, Crockett was killed at the Alamo along with approximately 190 others who dared stand in Santa Anna’s way as he and his Mexican Army swept north and east in an attempt to snuff out the Texas Revolution. That being the case, no clarification on the information in the Burgin letter was ever given. Most historians feel that the account in the letter was just an attempt by Crockett to entertain his brother-in-law. Some, however, feel differently. Many point to the fact that Crockett “swore” his account was true not once, but twice in the letter.

The entire matter of the creature/apparition appearing and verbalizing a warning to Crockett is about as bizarre an incident as I have ever come across. Certainly, the description of the creature given by Crockett matches the classic description of a wood ape or Sasquatch. The “ugly countenance, covering of wild hair, and the small and needling eyes” described all sound familiar. So does the estimated height of “three foundlings” (while there is no exact height of a foundling – a small abandoned child – most agree a safe estimate for this description would be somewhere between 7 and 8 feet). 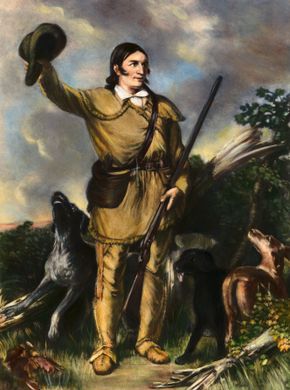 1 thought on “Davy Crockett wrote how a Sasquatch appeared to him to give him a warning, 1836”