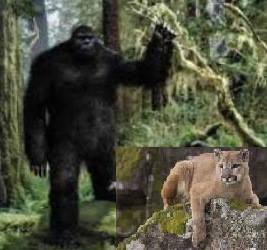 I have been a Sasquatch investigator for almost twenty five years. I am seeing a pattern being established that our island home is seeing a huge amount of Sasquatch encounters taking place in many regions. More so this late summer to present due to the salmon spawning taking place.

I just heard of a juvenile Sasquatch being seen walking out of Quinsam/Campbell River with large salmon. It grimaced and just walked off into bush. Intriguing, for this second report from same area during salmon season and area is pretty much classed urban environment for there’s hatchery and houses all around with walking trails.

Cape Scott Trail has been another hotbed of activity during the last few years hiking seasons. What makes this place so unique, is there’s no salmon river in area of encounter reports? It’s a good example of how places throughout Vancouver Island with no salmon river in close proximity is seeing more Sasquatch activity? I feel this is due to more productive areas being established territories by other Sasquatch clans and new territories are being occupied by the younger creatures breaking away from their clans?

Not unlike any other creature of the woods, it seems Sasquatch do have established territories? This based on Sasquatch individuals being seen in same region year after year. Another hypotheses is the seasonal vocalizations that are heard. Maybe this is clans announcing that a particular territory is occupied or one is not welcome? Speculation of coarse until we get a better understanding of the creatures we share our island homelands with?

Is there an over population of Sasquatch on our island? That’s hard to say and backup, but encounter reports are pointing in that direction. Case in point is the increase of dumpster diving Sasquatch at night being reported. I am following a couple urban areas where Sasquatch seem to be harvesting peoples back yards with gardens and fruit trees at night. First Nations are reporting more raiding of their smoke house’s for salmon throughout island by Sasquatch. One area of study, the Sasquatch is actually going into the greenhouse and eating tomatoes and oranges.

Then there’s the Vancouver Island urban sprawl that has taken over or pushed into prime high concentration seasonal protein areas for Sasquatch. This seems to be a major reason why the sighting reports have increased? More people out in the bush that are educated that it’s not taboo anymore to come forward with their encounter report adds to the increase in sightings as well.

Either way, this Vancouver Island Sasquatch investigator is seeing more sightings taking place in many regions that at one time no reports were coming forward. The increase seems to be pointing in the direction of our island having a population increase to our Sasquatch?

Please go to my Facebook Group SASQUATCH ISLAND to make a report or share your encounter story. Email tom.sewid@gmail.com