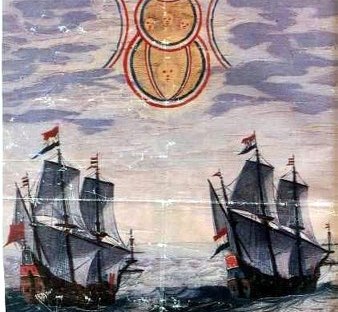 The following list came from an extensive historical research I found online some years ago on a website I lost track of. It listed many more unusual phenomena, from extreme weathers to natural cataclysms and anomalous events. I selected from the extensive list the following cases which may be related to UFO phenomena reported throughout history. Of course, many reports could refer to astronomical events like comets, shooting stars, meteorites and auroras, or to atmospheric events like thunderbolts, clouds, haloes, parhelion, mirages or tornadoes. Yet, some accounts deserve attention.

There are many more ancient written accounts of flying ships, like the Vimanas or aerial chariots of the Vedic scriptures. Herodotus wrote about a golden chariot fallen from the sky that burned for three days. Similar stories can be found in ancient litterature as well as in oral traditions from around the world.

This list covers briefly and partially some reports ranging between the first to the fifteenth century CE.

First is the year or date, followed by the source or location, then the report of the observation in the sky.

80, Scotland; ‘A burning fire’ in the sky at night. Also a ship in the sky

346, Britain; Five suns at ‘a great distance from one another’

587, France; ‘Snakes’ dropped from the clouds. A village ‘vanished’

590, France; Fiery globes traversed sky at night on a ‘number of occasions’

599 January 30, Arabia; Stars flew against one another. ’Like a swarm of locusts’

715 June 21, Britain; Armies and monsters in fiery sky, then storm

743, Ireland; ‘Ships with their crews seen in the sky’

793, Northumbria, England; Whirlwinds and lightnings. ‘Fiery dragons’ in the air

810, Aachen, Germany; Bright sphere sped from E. to W.; seen by Charlemagne, injured when his horse threw him.

1130 October 8, Bohemia; Flying ‘serpent’ at sunset. Seen from many places

1188 August 9, England; Cross in the air with ‘streams of blood’ at Dunstable, noon to evening

1233 June, England; Fighting ‘dragons’ in the air off the South coast

3 thoughts on “UFO Phenomena throughout History”