I was 20 years old. I was attending college in Colorado where I was living in a borrowed sheep herder’s tent (canvas walled tent with wood stove). It was late October and the moon was shining full over an early fresh snow fall. I decided to go for a jog in the snow by moonlight. I ran and ran. I lived about a mile from the campus on state land.

I had been reading a book about transcendental meditation which involved imagining leaving your body and staying attached by an imaginative rope to your body. It was a bit out of my normal reading which usually was more inclined to Tolkien or Heavy Metal mags. But I read the short book none the less. Along with instructions I had from an art instructor I combined three different meditative practices in to one night of terror.

I had also read in Outside magazine how climbers/explorers who reach high cold heights learned a meditative practice from the Sherpas. It involves imagining a heat starting at your core (stomach) area as a flame and bearing down upon it until this imaginative heat fills your entire body to your toes and fingers etc. It really works. So I applied what my art teacher instructed us to do which involved a centering technique.

I sat strait up cross legged on my bed roll while I rocked forward and back and forth until an imaginary silver beam coming from above was perfectly aligned within my spine. I was now centered, filling my body with heat by bearing down upon an imaginative flame from my belly while then imagining myself leaving my body where I floated around tethered to a rope that disappeared into the earth far below. It was quizzically fun then I tired of the practice and laid down to sleep. The combination of the jog in the few inches of soft snow along with the meditation left my body and mind tingling in a way I had never felt before. The fire was crackling and I was warm in my bed for only a moment when I heard a man’s voice outside my tent ask, “May I come in?”

I was frozen in fear. Then I heard my mother’s voice ask from outside my tent, “May I come in?” That sent my fear meter off the gauge. Then the man’s voice repeated in my head, “May I come in?” I never said ya, I never agreed to what was about to happen, I didn’t ask for this…, or did I! The next thing I knew I was taken somewhere where that same presence stood behind me and explained to me what I was seeing. This same person took me to many different places and explained to me what I was seeing each time. Some scenes were horrible, some where just too confusing and some where beyond my ability to process at the time but would take more then 20 years to assimilate.

This was my ‘this is your life,’ experience. This is what will happen if you do this and this is what will happen if you do that. So…, I set out to do everything I was told not to do by this person and each time I found myself knee deep in shit. Each time I came to realize ‘Oh shit, I’ve been here before. This was one of those scenes I witnessed and once again I am right where I was told I would be if I did this or that. Shit, and I knew it but did it anyways. Each experiences involved a great deal of humility measured by the experience. Some experiences were so humiliating that I am scarred to this day others are only known by me alone.

But one of the places I can remember and I will share it with you all. Keep in mind during this experience I was constantly fighting to get back into my body and each time this person would pull me out of my body and take to a new scene. each time the person took on a different persona, but was still the same person.

I once asked, “How come I can’t turn to see you?” His answer was, “When you overcome your fear to see me you will see me.” I have already reached that goal and I have already overcome that experience. It happened while hunting in Colorado four years ago. It has taken nearly that long, 4 years to come to grips with it. Plus I ran into a shape shifter while hunting in Montana two falls ago. He and I have a love/hate relationship. But he has taken on where my former teacher has left off because I believe my former teacher has actually died. While this new shape shifter has treated me like shit at times he has also provided me with healings. We both are coming to agree that we need to work together even thou he is so far beyond my comprehension at times.

From where I now stand everything I do from this day forward is done upon those scenes where I viewed myself being successful and happy in life after I walked through the crucible of humiliations after humiliations. All those scenes from the past are done and gone and even thou I reflect upon my life’s experiences I am no longer held to them and I now live in the ‘now’.

One scene I will share with you all involved standing within what was explained to me was a ship, a craft of some sorts. From where I stood the person narrating the scene stood behind me. He explained to me how the craft’s propulsion system worked. Most of it was beyond my ability to assimilate. It has taken just over twenty years to assimilate what was shown to me. I now can or think I understand how the crafts propulsion systems worked.

The individual who narrated all the scenes along with this one left a young man with a mind cracked. I soon fell out of school. I had a 4.0 going into my second year. I didn’t drink I didn’t do drugs except for the occasional cannabis passed around but I was pretty squared away. Years later, humiliation after humiliation accumulated into being a homeless broken man many times over. My mind was left broken along with my spirit. Have you ever seen that man living under a bridge screaming incoherent expletives at passers-by, well that has been me at least once in my humility.

Yes, it involves Sasquatch if you were wondering. It was a Sasquatch/shape shifter who came to my tent. It was a Sasquatch I saw while hunting in Colorado four years ago and it was my fear that I had to overcome by then. I watched the women for a few minutes before she noticed me. No, I could not see her if I looked directly at her. I could only see her at a distance in my peripheral vision. This was the key to overcoming my fears.

I had to be in complete control of my fear in order to accept that she could be seen in my peripheral vision and I had to accept that this was as real as my direct vision. Of course she was scared and pissed when someone unseen must have let her know there was some chump up on the trail looking down at her. When I heard her voice say, “You should leave now,” it struck me as odd because it was as if I knew her and recognized her voice. I certainly did know her and I certainly have heard her voice before but that is for another post. No one would believe how I already know her. Of course there was someone standing unseen next to me making sure I didn’t do anything stupid.

I now know it was another Sasquatch, not the one who took me out of my body but another individual who also knows me very well. He has been close to my heart ever since this experience and he and I share a connection that I am not ready to talk/write about yet. So I overcame my fears and I now know how to create a device that will allow us to leave the planet along with creating free energy, all thanks to the Sasquatch and one humiliating experience after the other until I was completely broken down and willing to accept what I was shown so long ago. More to come, thank you. 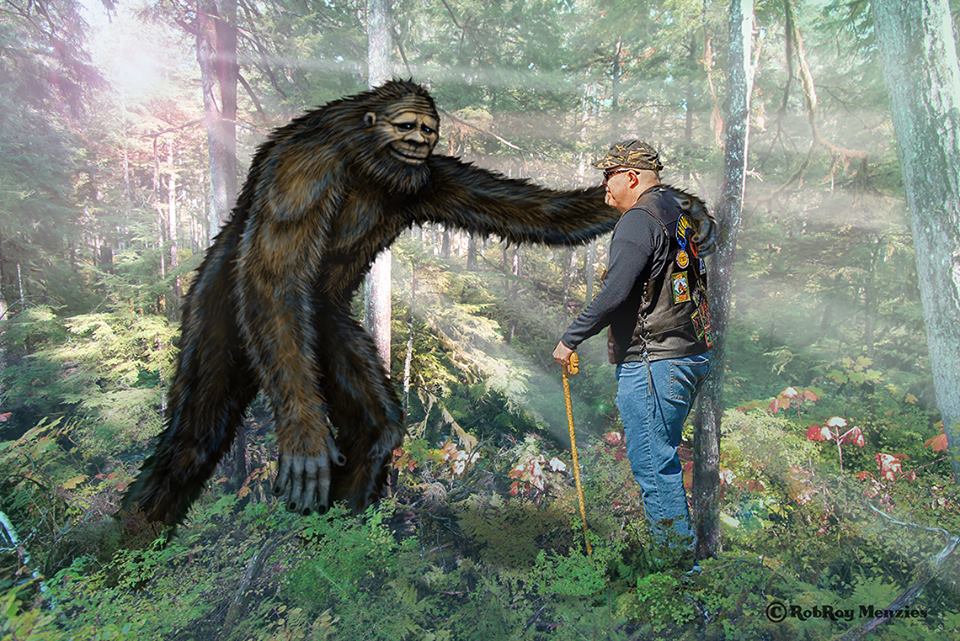