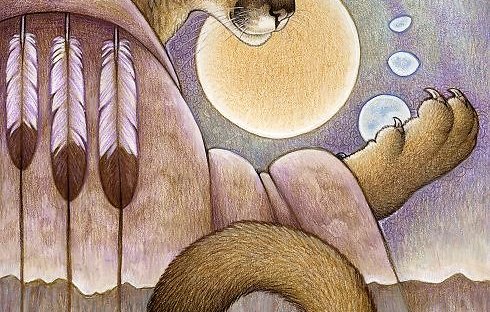 Note: This is an example of interspecies communication story that happened to me last year on this date. I wrote a more detailed account following this brief one below. Although it is not directly Sasquatch related, it was an intense encounter. Later, the Sasquatch told me while channeling writings for The Sasquatch Message to Humanity, Book 3, that interspecies communicators must learn to make Peace with our Wolf, Bear and Cougar relatives and meet them without fear, before meeting our other two-legged relatives such as the Sasquatch and the Star Elders, who can be much more impressive.

Last night, camping by the Similkameen River, I heard two cougars screeching in turn and coming my way, until they stopped on each side of my camp. They kept screeching back and forth until at some point, one sounded very very close.

I had my side door open to watch the shooting stars across the Milky Way. I looked up and saw a big cougar crouching and staring at me from barely 20 feet away. I sat up and it moved a few steps back. When I shone my flashlight, it turned around and walked back into the bush. It was a big size cat, with the tail alone measuring nearly three feet by itself.

I was very excited to see a cougar this close for over 15 seconds, but decided nevertheless to shut my door. For the next couple hours, the big cougar kept screeching and walking around my van at a distance of about 10 yards. I was pleased to watch it appear between bushes or plainly walk in the open.

But after a couple hours, it was obvious that it was stalking me and I started wondering if it was going to wait all night for me to come out in the morning. I started paying attention and realized that the screeches sounded sad and angry. That’s when I started sending telepathic messages to my visitor.

I thanked her for her presence and beauty, honoring the medicines she carried and sending Love and blessings, as I usually do when talking to animals. She told me that one of her cubs was recently murdered and the other one which I never got to see was hiding in the bush not far from us.

Out of anger and grief, she wanted to spill Human blood for revenge and secure her territory to protect her surviving cub. So I told her I was sorry for the loss of her cub, and asked her to forgive Humans who fear them out of misunderstanding.

Suddenly, her screeches, from angry and mad, became soft sounding, with audible sadness almost like crying, and she was touched by my compassion and sensibility. She left for some minutes and came back, telling me that this would not bring back her cub and that she needed to drive Humans out of her territory, on which she considers we are encroaching.

I told her that if she tries to hurt Humans or even only come around their settlements, she and her cub would likely get killed and that would not bring back her lost one. Her best way to safety, I said, was to run away to the wild mountains where Humans don’t hang out and avoid getting close to them.

Somewhat resigned but comforted, she then left for good.

The biggest cougar ever shot in Canada came from only a couple miles from here. This was the fourth time I saw a cougar in the wild and it was the closest and longest occasion.
This close encounter was a strong experience for me, learning to heal fear and anger, and make friends with powerful relatives in a peaceful loving way. We are all relatives… 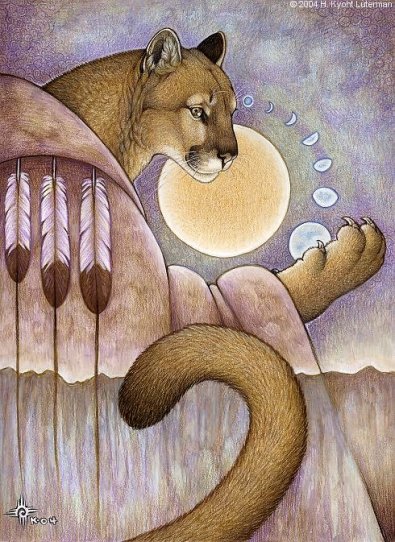 3 thoughts on “Close encounter of the Cougar kind…”