Sasquatch in the traditions of the Tlingit tribes

Note: This anthropological research shows that although just about every Native culture knew about Sasquatch, each tribe had a different history of relations with them and different beliefs regarding them.

The Tlingit occupy most of what is today termed southeast Alaska. There, the belief in hair-covered manlike beings called Kushtakaas is still strong today. Although similar to a man-sized Sasquatch, they were (are) believed to be the embodiment of lost relatives… Kushtakaas were essentially men who through near drowning or becoming lost had been influenced by the Kushta or land otters and had grown hair all over their bodies, lost reason and gone to live with others so transformed -the ”land otter people”.

Traditionally, Kushtakaas were able to live off the sea life abundant along the rocky shores and beaches and, like the otter, whistled to communicate to each other. They were also attributed with a call of ”something like a baby crying”. They were intensely feared for their ability to capture one’s soul by hypnosis. In early texts on Tlingit folklore, wars with the Kushtakaas were frequently mentioned, with either side the victor depending on the account. Tlingit doctors, ixt, derived their power through the otter, especially its tongue, and such individuals were the foremost defense or cure for a captured relative.

Killing a Kushtakka was expressingly forbidden as it may likely have been a lost relative, or since killing one might have incited a war with the Kushtakaas. Of all Native people in southeast Alaska, the Tlinglit especially have continued to carry a strong regard for leaving such creatures alone, and would certainly take issue with anyone inclined toward shooting such a being, although such Native events are occasionally referred to among the northern Tlingit.

Kushtakaas were variously portrayed in carvings as beings in human form, but hairy and sometimes down on all fours, as if in tranformation into a land-otter. In most older accounts, the arms were said to come out of the chest, perhaps an allusion to an extremely round-shouldered posture. A short or long tail was sometimes mentioned, but only occasionally. The carvings of Kushtakaas do not reveal a tail.

Kushtakaas are still strongly believed in by many, if not most, tribal elders, and the sound of a baby crying in the forest at night or peculiar whistling has caused at least one respectable Saxman, Revilla Island woman to seek spiritual support of her church… However, one may wish to look at Kushtakaas in Tlingit society today, whether as real animals similar to the Sasquatch, or human-like beings with spiritual connections with man, they have a powerful reality on many levels which is still wise to respect.

Etnographer John R. Swanton recorded numerous Tlingit myths and legends, which he published in 1909. One such tale was the following that relates to Kushtakaas, excerpted from Tlingit Myths and Texts recorded in Sitka under the title ”Various Adventures in Cross Sound”. It involved several hunters who had broken the taboo of killing a land otter.

”After the pot had boiled and they began eating a land otter they had killed, something began to whistle in a tree near by and threw a rock down. They threw one back and soon rocks were flying back and forth. It was not a great thing to fool with. By and by the men said, ‘You might cut our faces’, so instead of throwing rocks they seized long cones and threw these back and forth all night. Toward morning the being in the tree, which was a land-otter man, began to hit people, and they on their part had become very tired. Finally they tried to get him down by lighting a fire under the tree where he was sitting. When it was burning well, all suddenly shouted, and he fell into it.Then they threw the fire over him and he burned up. But when they started for the beach to go home, all wriggled from side to side and acted as if they were crazy; and when anyone went to that place afterward he would act in the same manner.”

A good example of traditional Tlingit belief in the transformational aspect of Kushtakaa was given by a Petersburg Native, Herbert H.. His story was based on an experience that his uncle had related to him, occuring on a gravel road on the outskirts of Petersburg in the summer of 1948, or about that year.

”Late in the afternoon my uncle was walking down the old dirt road south of town when he heard a creature moving in the roadside bushes to his right. He would catch glimpses of a hairy, man-sized creature on his right, then another to his left. When he would speed up, they would speed up. When he would slow down, so would they. It gave him the creeps. So he really picked it up and he could see the one on his left would mimic his facial expressions and then much too his surprise, the one on his left appeared to transform its face into his very own facial likeness!” Herbert added that his uncle said ”It really spooked me!” Herbert concluded, ”You probaby know Tlingit folklore acknowledges that Kushtakaas can change shape into people, that’s how they try to lure you into the forest. They’ll try to hypnotize you with their thoughts, and they’ll try to get you to become one of them.”

Klawock Thlingit researcher, Al Jackson, (he prefers the ‘th’ spelling) has pointed out that among southern Tlingit: ”Besides Kushtakaas or ‘land-otter men’, which were often regarded as spiritual beings, in Thlingit there is another name for Bigfoot: Hootsland, litterally meaning ‘Bear-man’.” There are still some people in Ketchikan and Saxman today who recognize this term as describing a hairy, man-shaped creature in the bush, not to be confused with the older beliefs in Kushtakaas and perhaps more resembling a generic Sasquatch. 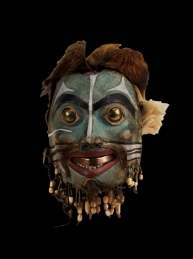 1 thought on “Sasquatch in the traditions of the Tlingit tribes”