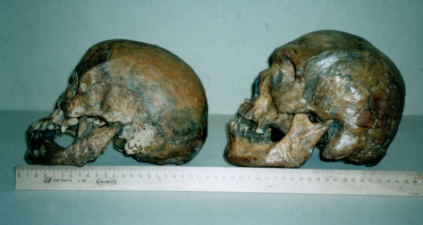 Dear Collegues,
The discussion on the Bigfoot DNA initiated me to share with you some thoughts about this subject.
There are some contradictions in DNA of Bigfoot studies by various researchers caused by the results claimed by Dr. Melba Ketchum – and a lot of critics of her work, directly or indirectly from several geneticists and other biologists.
In this regard I would like to base just on one example I am a person involved in: the study of two skulls connected with Zana case (attached photo #1) attached). One is of her son Khwit, and another one of a woman from the neighboring grave, very old and special one: in the contrary to the others (we exgumed on that time in 1975 some seven burials on one old clan cemetery), she was laid on the side, with legs bent (#2). Her skull is on the #3.
As to their morphology, the Khwit’s one was determined by anthropologists as of Australoid kind, the woman’s – as of an African type. (The reconstruction made by a Russian anthropologist – #4)
Two questions arose: 1. Do both skulls belonged to close relatives? (If yes, a woman’s one could appear  Zana’s herself). 2. Were there any differences of Khwit’s mother from the local inhabitants and even of humans in general? If so, to which species could she belonged? We couldn’t answer these questions in the 20th Century. But due to development of genetic studies the hope appeared it the current century.
In the year of 2006 both the skulls were studied by a geneticist Dr. Todd Disotell and anthropologist Dr. Shara Bailey in NY University. After their study I visited them in NY (see the photo #5 attached). Todd’s answer to the first question was: Definitely YES! (Though Shara stayed doubt from the morphological view point). To the second question they answered: NO. (I need to note, that Todd was studying just a mtDNA, not the nuDNA. But as we understand now, we need the full genome to determine the species, including the nuDNA).
In a time period between 2010-2012 another geneticist – Vladimir Yamshchikov in Southern Researh Institute, Birmingham, AL – tried to find the DNA from the both skulls. (I visited him there too in 2011.) At least his conclusion on the first question was YES too – the skulls belonged to close relatives. If so – that woman’s skull belonged to Zana herself. In this case her face could have the outlook shown on #7… Though, I don’t insist on this, it’s just a speculation, I understand.
In 2012 Dr. Brian Sykes due to financial assistance of a NG TV Program studied the samples from both the skulls. His results are more known by BF researchers, that is why I’ll mention only a few points to share. The samples from both the skulls were handed to him personally by the Russian researcher Dmitry Pirkulov who visited London city. After in August 2013 Dr. Sykes visited Moscow, we (Dmitri Bayanov, Dmitry Pirkulov, Michael Tractengerts and me) met with him in Darwin Museum, and I handed to him personally another tooth from the woman’s skull and some hairs from Siberia, definitely left by a bigfoot there on the track. Dr. Sykes ensured me that he’ll study the samples and inform us about results. He also promised to send us his book which was under preparing at that time…
The time of couple years passed after that. We learned about the Dr. Sykes’ book from media, some discussions arose about his conclusions. But no message from him, no book, no article we received since that our meeting in Moscow. I even don’t know, if he studied those samples which I handed to him…
And one important note: as to discussing his results of DNA study of skulls he emphasized definitely, that the skulls DIDN’T BELONG TO CLOSE RELATIVES! He repeated this not once to my questions while we were meeting and correspond at the first time after the meeting…
I attract your attention to this answers about the relativeness to show that there are principal contradiction in conclusions re such a not very complicated question as a determination of the close relativeness. In this regard how we can trust the conclusions re more complicated question as a definition of the species or the differences of the BF DNA and human DNA? And some other questions arising re impartiality of the researchers whom we have to trust…
I make MY OWN conclusion that such analyses yet are VERY MUCH subjective, depending of the attitude of a personality making such a job. And in this regard – let’s wait a little when the genetics as a science will be more transparent, and when geneticists will be more capable to repeat the study of samples and be impartial while checking the results of each other to say exactly what the bigfoots’ DNA shows.
Thanks for attention!
Igor Burtsev

2 thoughts on “DNA studies, by Dr Igor Burtsev, director of the institute of hominology of Moscow”