By Bob Kerer, Hanuman and the Vanara

I first came across SunBôw’s work while researching connections between Hanuman and present day sasquatch and after my partner and I had an encounter in southern Colorado in October 2017. This was exactly one week after attending a sasquatch conference in Denver. Our contact also occurred during the week we were visiting the Hanuman Temple in Taos, New Mexico.

Over the last couples of years I’ve fallen in love with Vedic scripture like the Puranas, especially the epics of the Ramayana and Bhagavad Gita, and have also been enthralled by the saints and sadhus of India. I base my spiritual practices around this ancient wisdom and devotion called Bhakti yoga

A major part of my practice is chanting and meditating on the Hanuman Chalisa, which is a 40 verse love poem/prayer/mantra that millions of Hindus recite everyday. I believe that this chant somehow unlocked something that allowed the forest folk to make contact with us.

We were visiting Great Sand Dunes NP and decided, somewhat unexpectedly, to stop on our way home at a popular nearby hiking destination that featured a waterfall in a deep gorge area. It was a short hike on a relatively crowded hiking trail at 9000 ft in the Sangre de Cristo Mountains.

After seeing the Falls we walked back up to a bench when I noticed motion above us on a ridge that paralleled the trail and ran into the top of the waterfall. Approximately 100 to 150 yards away a large white form slowly stood up, took a couple of steps to its left and stopped halfway behind a tree.

I told my partner to grab the binoculars and it didn’t take her long to see what I was looking at and what was looking at us. This is when we noticed two things.

The first was that a large tree was being violently shaken directly behind the white individual, directly on the other side of the ridge, about 20 or 30 yards away from it. We can only presume that that was another one.

The second was that we experienced some pretty crazy eyeshine/ reflection that I have never heard of, especially in broad daylight. It was about 3pm and he was facing the sun, but his eyes reflected so bright that when I put the binoculars on him the glare prevented me from seeing his face. It was like it’s eyes were made out of bike reflectors or mirrors. This is the best way I can describe it.

I also learned that binoculars work a lot better if you can stop your arms from uncontrollable shaking. My partner tried holding her breath while focusing but it’s hard when your borderline hyperventilating.

I could see him fine without the binoculars but he was far enough away that I couldn’t make out facial details. But we were close enough to be certain of what we were looking at.

He let us see half of him. The other half was behind a tree. We starred at each other for approximately two minutes. He had long white hair with grey steaks though it. He had a very “yeti” like appearance and was somewhat reminiscent of the abominable snowman from the old Rudolph reindeer Christmas cartoon; darker color face and chest.

It was only a matter of time before other hikers came up the trail and interrupted our time together, but when they did, we got a great look at him as he turned. There were three or four giant steps to its left and disappeared behind the other side of the ridge.

It sounds narcissistic, but I really feel like they singled us out and presented themselves in the most non threatening yet convincingly way possible.

It seems they may recruit people out of and watch over sasquatch conferences in an attempt to select people who may benefit their planetary stewardship initiatives. We all have roles in helping and ambassadors come in many forms.

I have never posted this sighting report on any website until now. I feel we were blessed with something extraordinary and didn’t want to exploit it. It is only out of the love and respect that I have for SunBôw, Kelly and Kewaunee and the whole Sasquatch Satsang Community they are building, that I feel comfortable sharing this on a public forum.

They have alleviated a lot fear and answered a lot of questions. They have helped give me the courage and know how, to continue with future interactions that have led to success to this very day. But that’s another long story for another time.

When I got home to California I came across Kelly’s and Kewaunee’s website, Psychic Sasquatch when I was looking for references to Hanuman. This led me to SunBôw’s books, where I read Chapter 11 in Book 1. The second paragraph said

“ In the sacred books of your most ancient surviving civilizations, dating from before the ice ages in a country you call India, the important contribution of my people, known as the “Ape-People” and our leader Hanuman were highly honored, in our common efforts to fight the lower lords and re- establish the Cosmic Order of Earth.”

There are other many references to Hanuman and Vedic knowledge throughout Sunbows and Kamoohs book, and even a summary of Ramayana in Chapter 9 of Book 2 pg 137

The connection between Hanuman and the Vanara people and our forest people are undeniable (at least to me) but it should not be mistaken for mere mythology. By understanding Hanuman, we understand how to live a life of dharma and devotion to the Great Creator Spirit, in whatever form He/She wishes to take.

We should all serve as Hanuman served. 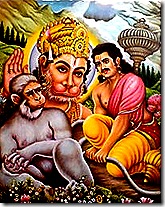