I wanted to talk about my experiences camping in one of my special places on Thursday night, because there is a lot of insight to be gained, in my opinion.

When i initially got there and started my hike towards my destination i got some modest loving energy. It was not of the intensity that can have me openly weeping at the drop of a hat, but nevertheless it was welcomed. They were openly receptive to my trip, and were letting me know in their unmistakable way. The day was warm and sunny and i was planning on camping out under the stars. Rain was not in the forecast, luckily.

The actual trip there was arduous to say the least as flash floods and other natural calamities had left the trail almost impassible in spots. On a couple of occasions i had to bushwack way off trail in order to sidetrack fast running water hazards. Fun to a point!

When i arrived i was surprised to see a young man and his dog Wilbur, a funny scruffy little terrier cross with a hyperactive, inquisitive nature. Ironic that i remember the dogs name but the fellows escapes me. Wilbur’s guy was a friendly sort, his energy and vibe were very good, and we started chatting some. He was familiar with the woods here and had done some hiking over the last number of years, and i asked him if he had ever experienced anything unusual. Not really he replied, but a guy told me he saw a Sasquatch here once.

As we were talking i was getting really strong energy from them, which is often the case when they are encouraging things like speaking of them with others, who are receptive or connected ect. Suddenly he looked startled and jerked his head towards the bush saying that something was crashing around in there. I asked if it sounded like it was walking on 2 legs and he said yes.

For whatever the reason i did not hear anything, but with my challenged hearing that is not unusual. And there is no question they can make one person hear or feel something and another right beside them will not. It was for him to hear, and a seed was planted because as he left i could tell he was mulling things over. He was also the type of person who would get it if he invited it in. He said he was a scientific type but i knew he was much more than that.

This was my 3rd solo trip deep into the mountains in this particular area and every successive one made me feel more at ease. Of course they were heavily involved in assisting with that process.

This particular place had easy access from a trail and i was concerned that bears could wander in seeing as it is the time of year they get active again. I know the Sasquatch people watch over me, they have proven that on more than one occasion, but that does not mean you can throw caution to the wind. Susan and I had recently watched a movie where a Grizzly had stalked and killed a guy. True story and really graphic. Not the best food for thought at the time.

After Wilbur and company left i went about gathering wood for the long night ahead. It promised to be clear, with a brilliant star dotted sky but the temp was going to drop dramatically as well. As i was going about my gathering i heard a slight noise in the bush followed by a beautiful loving energy. “Were here and watching over you” was my immediate thought. I was immediately totally at ease. These energy occurences/communication are much more than feelings. They are concrete and unmistakable. That said one has to experience it to understand.

During the night i got my drum out and played to them for hours. I knew they were watching, and i imagined they were all dancing on the beach with me. Perhaps they were.

When i got up the next day it was not long before i discovered their offering. Placed a mere few yards from my therma rest was a beautiful X/A glyph. On my previous over nighter one of the Stinkers Inc boys (my fun name for the juveniles) had actually placed a peeled X right under my pillow as i slept under the stars. Today’s offering was beyond obvious. 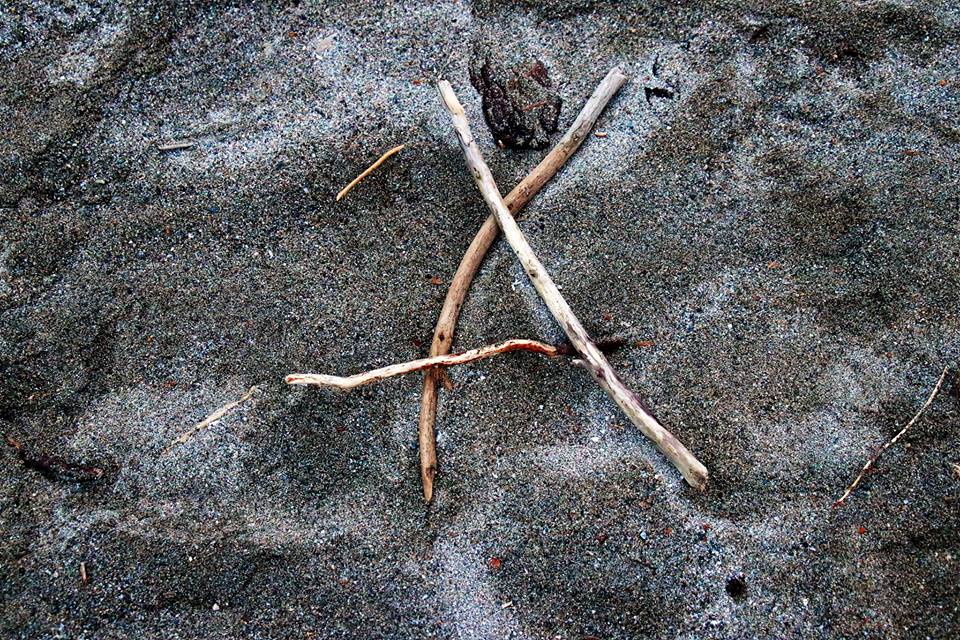 My meaning for the X/A, garnered through telepathy, energy, observation, education and experience is welcome/friendship (X) and Arrrie’s signature (A). Seeing as this was the first time i had camped in this exact local the message was more than appropriate and was instantly understood.

To me the key points were about the potential for Wilbur’s guy to find out more about them, and potentially himself, which is what it really leads to, and the continuing ease with which they make me feel around them. Soon we will be sitting around the fire like old friends and family. Thanks for listening!