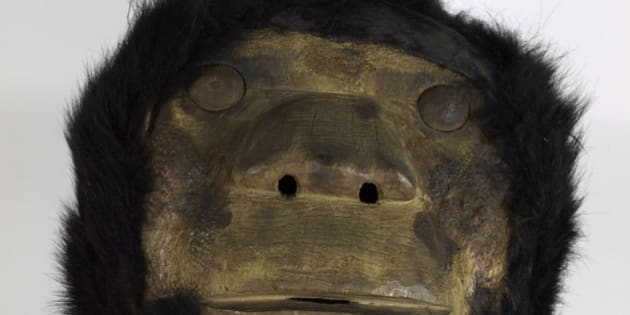 Hunting for an elusive sasquatch mask revered by a British Columbia First Nation has been a 16-year journey for James Leon, taking him through London, Boston, New York and Ottawa. In the end, all it took was a question to the lady sitting next to him at a Vancouver event that led him to his nation’s Sasq’ets mask that vanished 75 years ago.

Leon was at a repatriation event for another First Nations artifact held by the Vancouver Museum when he asked the lady sitting beside him if she knew of the ape-like mask partially covered in bear fur.

“Her eyes lit up and she said ‘We were just looking at that mask the other day.’ And they were gracious enough to go get it for me,” he said with a chuckle.

The mask disappeared in 1939 from Sts’ailes First Nation, near Harrison Hot Springs in B.C.’s Fraser Valley.

Photo: The same mask at the first Sasquatch Days in 1938, an annual Native led event in Harrison Hot Springs, BC.

Community elders told Leon that the mask had been taken by J.W. Burns, a teacher at the Chehalis Indian Day School, and a man obsessed with the sasquatch legend.

Burns, who is often credited for bringing the word “sasquatch” into common use, donated the mask to the Vancouver Museum.

Leon took the job of finding the mask seriously and learned it had been on travelling display. He searched through the archives of several museum’s known for having artifacts from British Columbia.

While all those elders are gone, he said they’d be pleased the mask has been returned.

“We do burning for the sasquatch. It’s our belief that his primary role is to ensure that the land is being taken care of. Because everyone of us, as Sts’ailes people, we carry an ancestral name, a rich name from the land.”

Museum of Vancouver CEO Nancy Noble said musuems have a social and cultural obligation to consider repatriating certain objects from their collections to First Nations.

“For aboriginal peoples, the return of an object with significant cultural or spiritual value can help to rebuild awareness, educate youth and strengthen ties to a culture that was often suppressed or taken away,” Nobel said in a news release.

The mask was carved by Ambrose Point based on stories “from the beginning of time.”

While the more recent stories of bigfoot are enough to produce nightmares, Leon said his people consider spotting a sasquatch good luck.

“There are certain things that happened to us when we see one,” he said. “They call it gifts that come with seeing one, like I’d be a good speaker or a good hunter.”

There’s an even better endowment — a golden gift — if the sasquatch sees you, he explained.

Leon said his closest encounter to a real sasquatch came many years ago when he was walking with his then-wife.

“She kind of pushed me aside, so I didn’t see it because I wasn’t ready for the gift that comes with it.”