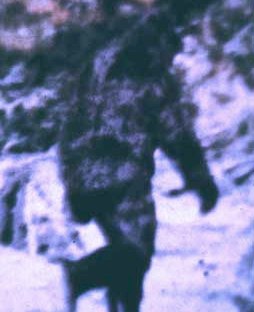 Note: SCENIC is not the only platform gathering Sasquatch stories and publishing them. We found this interesting chronicle in The Delta Discovery, a Yukon news outlet

To share your Sasquatch stories with us, please use the ‘Submit Story‘ button.

In late April 2013, a worker at the Napakiak village corporation was just taking a look outside the 2nd story window of the building during the early afternoon hours, when she saw something unusual walking on top of the bluff on the other side of the Napakiak Slough.

It was dark-colored and walking on two feet. “It was real unusual, too tall to be a person,” she said. “It was taller than the brush on top of the bluff.” She had seen people before on the bluff and they were never that tall.

Then it walked down to the lower part of the bluff and disappeared. About 10 minutes later, it reappeared, so she ran downstairs and called to people inside the store on the lower floor of the building to come up and take a look at what she was seeing.
About eight people came upstairs, went to the windows and they all saw it. They were all excited.

There was still some snow on the ground on this late April day, and they saw children playing and sledding down the bluff. Some of the kids then saw the creature and started running for home, crying in terror. The children later described the animal saying, “It’s hair was dark brown.”

As they continued watching, a snowmobiler appeared from over the hill on the Napakiak-Bethel trail. The driver apparently wasn’t paying attention and didn’t see the creature, but the creature did something unusual. It hid from the snowmobiler by crouching down on the ground and moved off when the snowmachine passed.

Moments later, the people on the second floor of the village corporation building watched the animal amble away and over the hill in a northwesterly direction until it disappeared from their view.

The worker that provided this story said this wasn’t the only time Hairy Man people have been sighted near Napakiak. The day before this sighting, a lone ice fisherman near Napakiak had seen a group of them together.

The person that provided the picture of the footprints went a day or two later and photographed the footprints of the being. Even though the tracks were distorted after a couple days by the hot sun in springtime, it was clear that the footprints were too large for humans.

The worker’s mother and father always told her that these Hairy Man beings have their own families, that they are trying to survive just as we are, and that we have to respect them the same way we respect the land.

The worker said these beings will also defend themselves if they or their family members if they are threatened, so we have to leave them be when we see them.