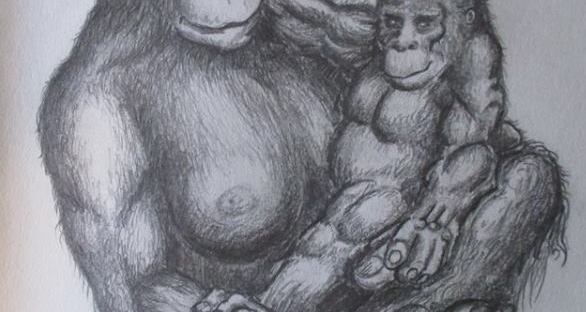 I would like to first off have my privacy respected. Please do not include my name, if you plan on posting it. That would be great!

So this is not a physical encounter. Rather, it’s a dream encounter.

So in the dream, I was standing behind my wooden deck in my backyard. A juvenile Sasquatch had seemingly manifested himself in such a way that it looked like he jumped out of the deck and within an arms reach of me.

Even though this was a dream, I was able to use my conscious brain and snap! It instantly clicked in my mind that this was a juvenile. And that the adults must not be too far away. I dashed into a sprint and rounded my house to the side door. Getting in, I pulled on the storm door, but it wouldn’t close!

Next thing I know there’s an adult Sasquatch standing near the steps looking in at me.

It reached out it’s arm and pushed the storm door close. After that I locked it and slammed the solid oak door and that was it. The large one I felt that it was a female. Possibly the parent of the juvenile.

There is more to this story…. I’m currently going through a self healing process. I did say the large one was female. Even though it was a dream, I felt as though it was female. And I felt that the small one was male. And that the female was possibly the parent of the juvenile. Well, for whatever reason I felt she seemed kind of annoyed.

But anyway I talked to a shaman (that I’m doing my self healing with) who told me they (the Sasquatch) are around me. Whether in spirit, physically, or on another dimension. He told me they are the “black blobby” things I’ve been seeing out of the corner of my eye. I live in a metropolitan area that’s kind of a suburb.

So after the session (with the shaman) when I was at home, for some reason I started thinking about that female. Then it occurred to me that she wasn’t annoyed. She was sad!
And I felt a warmth radiate over me that felt very loving and motherly. That’s the best way I could describe it. It was energy I was feeling, but warming and enveloped the left side of my body.  I saw her image in my mind and got the word “mother” a few times repeating in my mind.

She may have a message, but I’m not telepathic enough to understand it yet. This has never happened to me before. I have been told I’m intuitive.  I’m still trying to grasp what happened. I’ve always had an interest in the paranormal. Sasquatch included.
Never in a million years did I ever think they’d be (possibly) around me.

This is the rest of the story. I don’t think this part should be posted. I am healing with the help of a shaman, perhaps they know what’s going on and see and opportunity?

Well there has been an update to this story.  From the energetic connection she made with me, I felt something come through. Little bits and pieces of the message. I should say that I am currently healing from past life traumas.

Well anyway, the day that I found “closure” and the real healing began for me was when this happened. She connected with me out of the blue, and I know she connected because this has certainly never happened to me before. Well, during her connection, I think that what she was trying to communicate to me was that she was my mom in a past life. I say that because I felt that, this is hard to explain, but I will word it best I can. It’s like I “felt” the word ‘daughter’, but at the same time it seemed to me that it was more of a “knowing”. If you know what I mean. I have “felt” like some issues in my life stemmed from a past life and it turns out I was right!

So I’m not going to debunk this. This is definitely NOT a coincidence. She certainly decided to “come out” at just the right time. Also, yes, I have thought about it and decided you should post the whole story.  I still would like to remain anonymous. It seems like some healing has been done, (I do energy healing sessions on myself) enough that I think I can come out about this more.

Thank you for letting me share. I suppose this is also part of the healing process.

3 thoughts on “Experiencer story, by an anonymous reader”