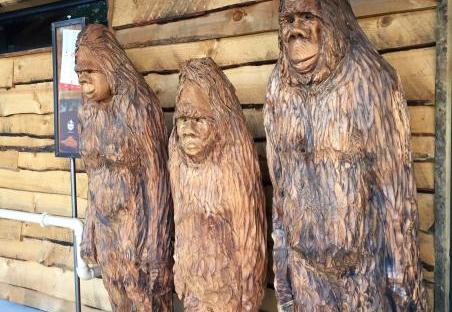 It was 1969 and I was four years old. We live close to a big city, but the area had streams and trees. My older brother and sister and all the neighborhood kids spent the summer playing on a two level tree fort. The day I had my encounter, when all the kids were in school and I wasn’t old enough for school. My parents had some friends over to help pack up. Their friends was a couple who were married. I had really wanted to see the fort one last time.

Both the front and back door of our house was open, so I went out the back door and walked along the side of the house and I got to the sidewalk and I walked down the street and entered into the backyard and walked up to the fort and stopped. I looked up and five hairy beings stood on the second level of the fort. They were anywhere from 3-5 feet tall. Much bigger then me. I stared at them trying to understand what they were. I had wondered why they didn’t look like the people in the movie Planet of the Apes. Then I had missing time.

The next thing I remember was being back on the sidewalk. The world looked very large and I felt like I was in a smaller body. I walked home but I didn’t know who my parents were. My Dad picked me and my mother smiled at me and I felt loved. Around two years later and I’m having a lucid dream. In the dream, five people dressed at the Star Trek uniforms complete with the badges. But despite the outfits I knew they were same beings I saw when I was 4. I got angry and asked why they left me here. They assured me that it was to help my soul grow. They stayed in my dreams visiting once in a while.

Now that I older they don’t try to pretend they’re some characters they show up as energy and I too am energy like they are and as I’ve gotten older they show me thing about the planet and they take me to other places not of this world. They have me slide into another person to feel what that person is feeling, kind of like possessing someone, but not to control them but to feel their emotions. I love when they come in my dream.