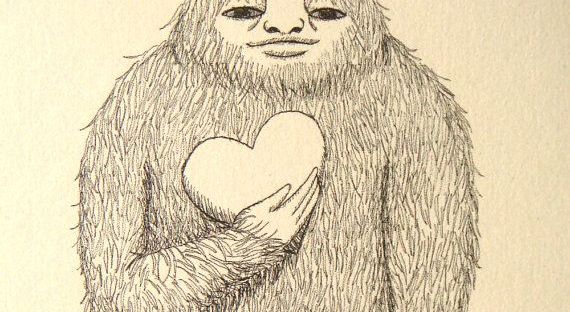 I was forced by some happenstance to camp alone in a small tent in July 2020 in Yosemite, near to Oakhurst, California. I put my tent next to a pathway near a friend’s yurt. About 2 a.m. I woke up hearing heavy breathing. I thought it was a bear, so I took off my underwear and put it between me and the creature that was breathing next to my tent. If it was a bear that might limit it attacking me because of my smell. I then sat in yoga meditation and waited. I smelled the most awful smell from this creature that stayed next to my tent for some minutes. It smelled like an animal had not cleaned itself for a year. After a while it moved on past me. I realized there was no aggression there, and it was benevolent. I did not look outside. I stayed meditating for a good while to be sure I was awake if it came back. I continued to meditate and had an encounter with Ramana Maharshi who gave me a lei of translucent eggs and said to throw one into each of the battery chicken farms I passed on my way home, which I did.
Years later I told a friend about this who had encounters with Sasquatch and she said that indeed they smell really bad. That was the first time I had it confirmed that I had encountered this being. I feel so grateful. Ruth

Greetings Ruth Angela, thank you for sharing your experience with our readers. Scent and smell is a universal mean of communication. Many reports talk about an awful smell associated with the Sasquatch. However, they use smells to communicate intentions, like repellent or attractive scents. In most cases when an unpleasant stench is reported, the observers often are armed or intrusive, with questionable intentions, so the smells are meant to repel them. Yet in many other cases, including first hand experiences and others I documented, the Sasquatch don’t smell anything at all, and at times they even can emanate a pleasant musky perfume or other nice scents if they feel good with the person they meet. In your case, my interpretation would be that putting out your underwear as a first reaction might have caused the response you received. Burning sage or incense would certainly bring a different answer, as they mirror our thoughts. But as you noticed, there was no ill intention or threat, maybe just their sense of humor at play.

Best blessings on your quest…