The ABC of Sasquatch, for beginners:

As disclosure unfolds, mainstream medias can’t keep silent on the subject of Sasquatch. While reports are generally presented with laughter as a myth to debunk, when not pranks or hoaxes, the growing public interest seems to lead to a more serious approach. Here are three examples of mainstream media reports from ABC, BBC and CBC, and as a bonus, a short Native experiencer report on an alternative outlet as a comparison.

This first 3 minute news report from 2015 on ABC is your typical cynical mainstream news flash addressing a Bigfoot story as a side entertainment or casual anecdote.

This next example is an article about Sasquatch published on BBC last July. Of course, the mainstream media outlet only offers here a basic research reviewing bits of info that are part of the public domain, with a few exclusive interviews, so the enthusiasts familiar with the subject might not lean anything new from this article and its conventional approach gravitating between the existence of the legend and modern skepticism. However, it is nonetheless interesting to notice a major mass media addressing the topic from the perspective of a research considering various points of view including less popular ones, namely from the S’ts’ailes Native tradition from whom the very name Sasquatch comes and who have had generations of interactions with them, as celebrated in their culture. The text below can also be read on BBC.

The True Origin of Sasquatch

Stories of a hairy, forest-dwelling, bi-pedal primate have persisted for centuries in British Columbia. But perhaps more important than whether it exists, is what it symbolizes. From a lookout above the Harrison River Valley in south-western British Columbia, dense forest stretches all the way to the snow-capped Coast Mountains on the Pacific shore. Thick with towering western red cedars, hemlock and Sitka spruce trees, the wilderness continues almost uninterrupted all the way north to Alaska.

Beyond the roads and hiking trails, the terrain soon becomes impassable, punctuated by steep mountains that plunge into glacier-carved lakes. This remote valley 130km east of Vancouver conjures an ancient land filled with mystery and possibility, and some believe it’s home to the world’s most famous cryptid – Sasquatch, Canada’s Bigfoot. (…)

I’d arrived at the viewpoint in an all-terrain vehicle with Bhima Gauthier, who leads tours to spots in the region where sightings have been reported. “I can’t say for sure that they are real,” he said. “I have a feeling that there has to be some truth behind it. And there’s a lot of stories, especially here we have a very rich mythology.” There have been 37 notable Sasquatch sightings near the town of Harrison Hot Springs since 1900. Called Bigfoot in the United States, and yeti or metoh kangmi (“wild man of the snows”) in the Himalaya, Sasquatch is a tall, hairy, bi-pedal, primate-like creature of disputed existence. Regular sightings have kept the popular legend alive, but now it’s being told from an Indigenous perspective. The change is driven by public interest in the idea of a Sasquatch rooted in spirituality and symbolism, rather than sensationalism. The creature is considered sacred to West Coast First Nations, particularly the Sts’ailes (sta-hay-lis), who have lived in the Harrison River Valley for at least 10,000 years.

To sate a growing curiosity, Harrison Hot Springs opened a Sasquatch Museum inside its visitor centre in 2017, and worked with Sts’ailes member Boyd Peters, who provided input on the original Sts’ailes acquisitions, including a drum and replica wood mask of Sasquatch. Other displays explain the Sts’ailes belief in Sasquatch as a caretaker of the land and totem for their nation (a stylized image of Sasquatch is on the Sts’ailes flag).

These exhibits are juxtaposed with casts of Sasquatch footprints, news clippings about sightings that date to 1884 and a logbook of reported local encounters. Since the museum opened, tourist numbers to the visitor centre have doubled to 20,000 annually, and the resort community received a CAD $1 million government grant to build an expanded museum-and-visitor-centre facility that will aim to balance the telling of Western sighting accounts with Sts’ailes stories and mythology. It’s slated to open in 2023. 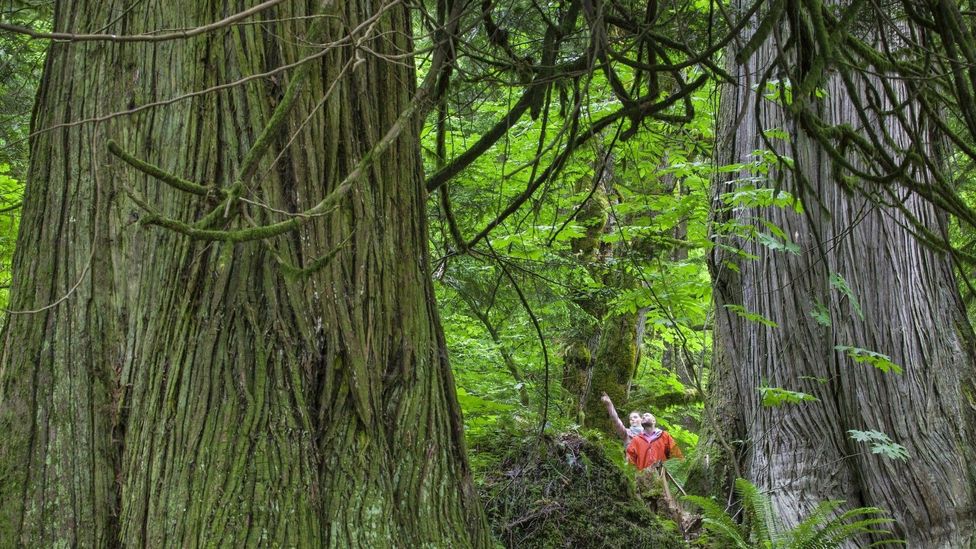 Under the dim green glow of the coastal rainforest, it’s easy to see how someone could mistake a mossy stump for a humanoid life form (Credit: Tourism Harrison/Graham Osborne)

Long before TV shows such as Animal Planet’s Finding Bigfoot sensationalised the pursuit of the creature, the Sts’ailes passed down songs and stories about sasq’ets, a supernatural slollicum, or shapeshifter, that protects the land and people. In fact, Sasquatch is the anglicised version of sasq’ets (sas-kets), which means “hairy man” in Halq’emeylem, the Sts’ailes upriver dialect. “The word comes from a mountain that’s called Sasq’ets Tel, the place where the Sasquatch gather,” said Kelsey Charlie, a Sts’ailes band councillor (an elected governance position). “Everybody paid reverence and honour to the emblem of our nation, which is the Sasquatch.”

In 1929, J.W. Burns, a Canadian government agent, published an article in Maclean’s magazine titled Introducing B.C.’s Hairy Giants, which he wrote based on stories shared by Sts’ailes community members he’d befriended. The article presented Sasquatch to the rest of Canada, and the tale took off from there. This intersection of Sasquatch as symbolic totem, and Sasquatch as living primate, has taken the story beyond mere speculation in Harrison Hot Springs. The town has become a magnet for those seeking answers, like the 26 percent of Canadians that believe cryptids such as Sasquatch are “definitely” or “probably” real, according to an Angus Reid Institute public opinion poll from 2016.

“People literally come here on a pilgrimage, and more than you might think,” said Robert Reyerse, executive director of Tourism Harrison. In addition to visiting the Sasquatch Museum, visitors can take a Sasquatch tour with Gauthier’s company, Harrison Lake Nature Adventures, or walk the Sasquatch Trail and take selfies next to Sasquatch statues. Every June, visitors can attend Sasquatch Days, which have been held since 1938. At the event, West Coast First Nations gather for canoe races, salmon barbeque and Sts’ailes Sasquatch dances. 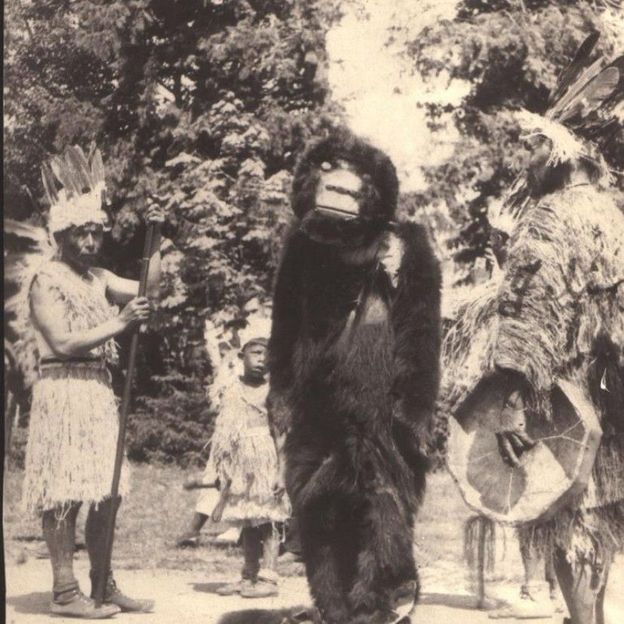 “Your first thought is, these [visitors] are going to be crazy, but they’re not,” said Reyerse. “They’re like ordinary people and some of their stories are pretty compelling.”

The town also draws researchers such as Thomas Steenburg, who has written four books on the subject, including In Search of Giants: Bigfoot Sasquatch Encounters, and has appeared as a guest speaker on the subject at events such as Alberta Culture Days. He insists he remains a healthy sceptic. (sic)

“I accept the possibility that the Sasquatch may turn out to be nothing more than mythology and folklore, and that alone makes it worth looking into,” said Steenburg, who lives in the nearby city of Mission.

If Sasquatch is real, Steenburg believes it’s an unclassified primate, possibly gigantopithecus blacki, an extinct ape from southern China that could have crossed the Bering Land Bridge and remained concealed in North America’s vast boreal forest. But the fact that no one has produced credible documentation of Sasquatch bothers him. Ultimately, the burden of proof lies in DNA, he said.

“Science needs what science has always demanded: a body or piece of body,” said Steenburg, standing next to a display case of Sasquatch footprint casts inside the Sasquatch Museum. 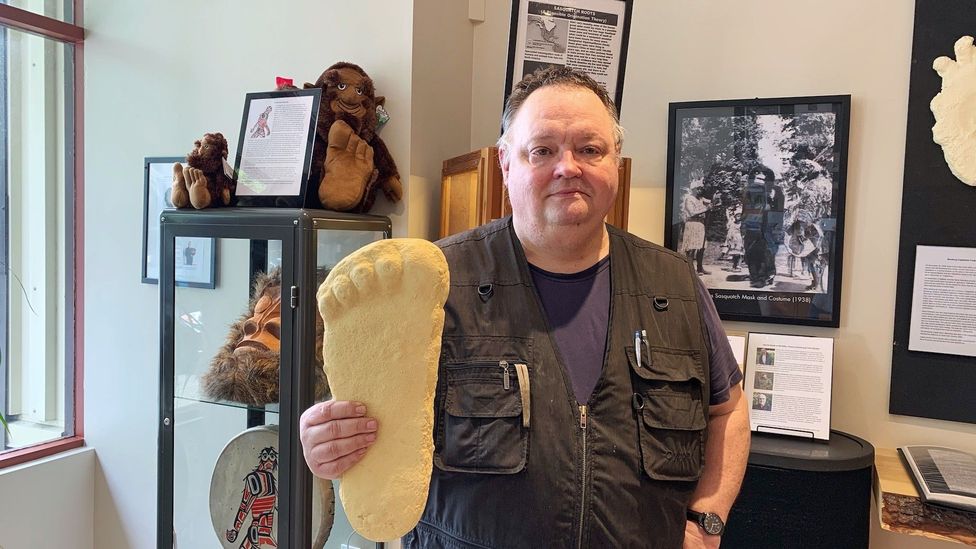 My curiosity piqued, I went hiking in nearby Sasquatch Provincial Park. Under the dim green glow of the coastal rainforest, it’s easy to see how someone could mistake a mossy stump for a humanoid life form. It’s a psychological effect called pareidolia – seeing an object where there is none, such as Jesus on a piece of toast. This phenomenon could explain the sightings, like the dark figure spotted close to a campground outhouse in 2010, or a purported Sasquatch that caused a group to flee another campground in 1994. It’s comforting to pass these off as someone’s overactive imagination, but these woods give Bonnie Kent pause. A former volunteer with BC Search and Rescue, she helped extract lost hikers from the bush for 15 years.

Kent, now manager of the Sasquatch Museum, initially rolled her eyes about the creature. But after listening to stories from travellers who have come from as far away as New Zealand, she became open-minded about the possibility. “My first response was that people around here used to smoke too much weed and see big hairy guys!” she said with a laugh, before turning serious. “Out in the bush there are a number of times when your hair stands up; there are areas that you just feel you’re not supposed to be there.”

As Charlie explained, Sts’ailes tradition holds that the creature can change from its physical form to a rock, tree or even another animal. “My grandpa used to say, ‘The slollicum is a shapeshifter and can walk in the two realms, the spiritual and the physical. That’s why you’ll never catch him,'” he said. But he’s not surprised people are still trying. “I think [Sasquatch] resonates because all cultures in the world had some thing, like a supernatural being, and through time and evolution and humanness, we’ve lost a lot of these things,” said Charlie. Perhaps science has made us all sceptics.

Charlie told me about how he saw two Sasquatch drinking water from Harrison Lake in 2002, a dusk sighting that made his hair stand up on end. At the time, he was bashful to tell anyone what he’d seen, fearing derision. 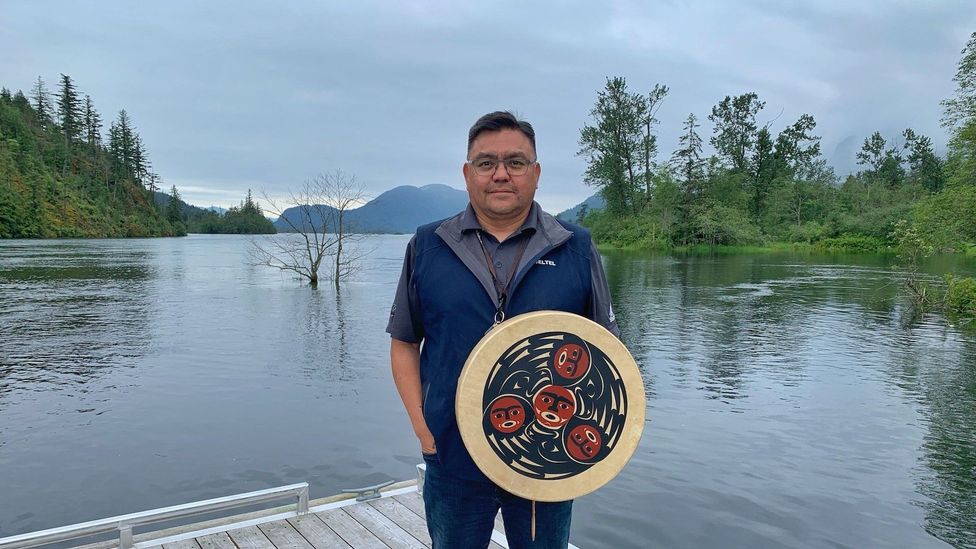 “You don’t want to have people looking at you in a certain way,” Charlie explained. “Then again, I thought, ‘Xwem xwem sq’welewel,’ which in our language means, ‘you’re proud of who you are, where you come from and what you belong to.” So, he shared his story.

Ultimately, seeing Sasquatch is considered a blessing and a sign of good luck, Charlie’s grandfather used to say. “If you’re able to see him, hear him or see his footprints, there’s some type of good fortune that’s going to come your way because he’s making sure that you know that he’s there and that you still have to live by the rules,” said Charlie, referring to the agreement between humans and sasq’ets to live in harmony with nature. “They live off the land, they live on the land, they are the land.”

It’s a sentiment shared by Steenburg, and perhaps a place where Sts’ailes mythology and Western fascination come together. “Sasquatch, if it exists, is a symbol that there’s still wilderness out there,” he said. “We haven’t tamed everything.”

Related article with video on CBC (2014) about Chehalis, mentioning the capture of a female Sasquatch in 1890 who was kept in captivity in Victoria for four years.

Sasquatch lore reaches back far into B.C.’s past. The Chehalis people near Harrison Lake talked about ape-like creatures in the woods.

The hairy beast known as sasquatch in Canada — or Bigfoot in the U.S. — has enjoyed a place in B.C. lore for centuries. Tales or encounters originate from time immemorial, when the Chehalis people talked of a hairy ape-like creature living in the forest near Harrison Lake. In the 1890s, a sasquatch was reportedly trapped and put on display on Vancouver Island, before being returned to the woods. And, in 1984, a B.C. man named Gord Flanders told CBC News he saw one and heard it growl while riding in a truck near Harrison. CBC’s Tim Weekes takes a look back at sasquatch through B.C. history in this week’s Rewind video segment. Click on the image above to watch.

For more detailed research and deeper knowledge on Sasquatch, get your copy of

HAIRY HUMANOIDS FROM THE WILD – ENCYCLOPEDIA OF ALL THINGS SASQUATCH, by SunBôw TrueBrother.

Thanks and Blessings to All…