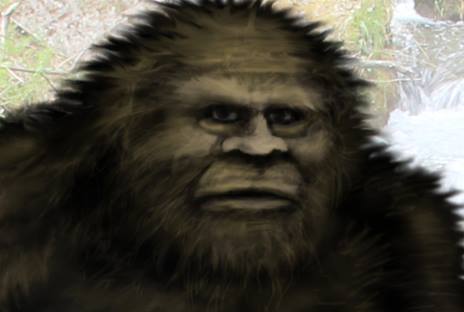 My first experience with Sasquatch happened in the fall of 2013. I stepped outside one late afternoon and heard a blood curling scream from something very large with 2 sets of vocal cords. One set sounded howl-like while the other screeched. The scream made every hair on my body stand on edge and it was coming from the tree-lined river approximately two blocks away. I instantly knew exactly what it was, but kept trying to convince myself it was a dog. The sound was so loud that the only other possibility was 2 people on megaphones, one howling and the other screeching. I quickly told myself “you heard nothing” and took a few more steps when the being screamed again. I quickly got in the car and took off to run the errand I was set to do. After this experience, I could not stop thinking about Sasquatch. Every spare moment, I dedicated to looking up videos and articles regarding the being to try to understand it better.

This research I concluded after a year of having watched virtually every Sasquatch interview, recording and explanation that I could find. I was most interested in hearing explanations that lined up with teachings from Native elders, as I knew they had to be the authority on subject, having been here and having had more contact than any settler. My research kept pointing back at Kewaunee Lapseritis interviews as his spiritual and inter dimensional explanations regarding Sasquatch lined up closely with teachings from Native Elders.

I decided to try a technique that he discussed in one of his interviews regarding how to connect with a Sasquatch, right from home, so as to dismiss it as untrue. Instead I got a telepathic message from another being which I wrote down. Now at this point I began questioning my sanity, wondering if I had made the whole message up in my head. I decided that was the case, only to later have confirmed the similarities of this ancient language given to me in the message to those of a Native American band in the area.
Up to this point all of my Sasquatch research was done in secret. I had since married and my husband was unaware of any connection between myself and Sasquatch.

During this time, my husband began jumping out of bed and stating he had seen a big hairy man in the doorway, or peeking into the window. He swore to me he wasn’t crazy and I reassured him that I believed him. My Sasquatch research, which was carried out in secret, began to prove a spiritual and inter dimensional connection to the Sasquatch peoples. It also proved that they are a peaceful, loving, beautiful people; love vibration being the only way to access a Sasquatch and the nature of their care in the telepathic messages and inter dimensional signs they often show to those who are connected to them.

The most amazing sign for my husband and I was when one crossed the road in front of us on our way camping and touched the guardrail upon reaching the other side in about the blink of an eye. We both witnessed the event and marveled at what we had seen. Shortly after this event, I confessed to my husband the Sasquatch research I was doing and told him this was why he was having experiences. He actually took it rather well.

Unfortunately, my marriage did not last, not because of the Sasquatch experiences, but due to disrespect. However, my Sasquatch experiences were far from over. Because the break up was heart-breaking, the Sasquatch I began to have experiences with began to comfort and heal me. There have been times when I have fallen out of alignment with the Universe and during these times, they have stayed away for periods of time. Most of my experiences with them are magical and happen when I am in alignment with my purpose and when I have healthy, positive interactions based in love with my children. It is during those times that I receive signs that they are there with me in another dimension.
I have a very strong connection with one in particular who I have grown so close to that I often sit inside him (he in an alternate dimension) and during these times we connect in a deep, loving and spiritual manner. My connection with him has helped me realize that I have had previous interactions with him than the one first mentioned here, but mis-labeled him as a ghost because of his inter dimensional abilities. I am grateful for the relationship I have with the Sasquatch peoples and especially for their deep care, super intelligence and love.