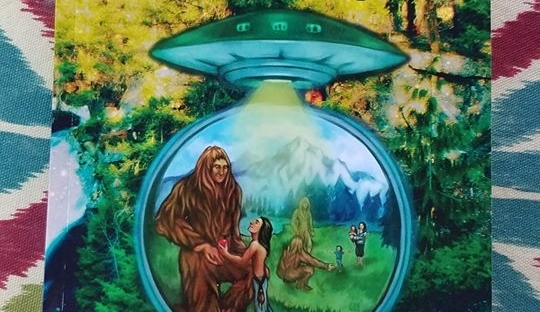 This is the introduction by Leigh Kerr to her chapter in The Sasquatch Message to Humanity, Book 3: Earth Ambassadors Cooperation, newly available this week. 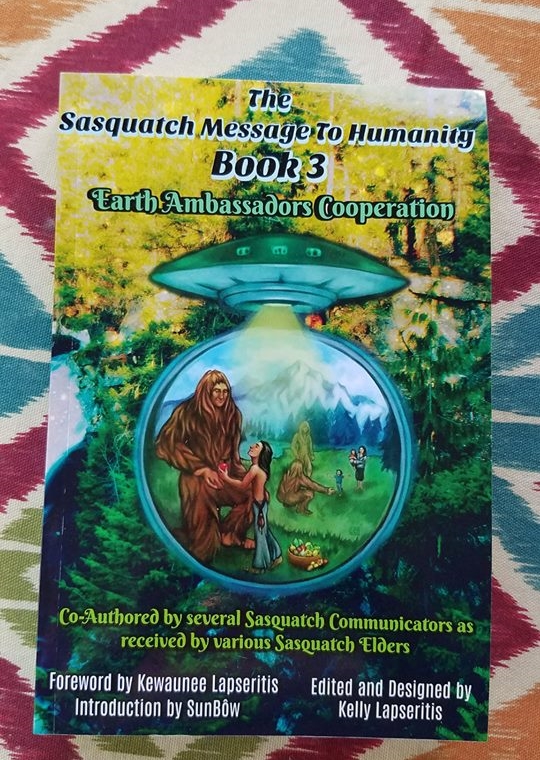 Book 1 and 2 of the series, by SunBôw, are also available on Amazon:

My name is Leigh Kerr from Australia. I am a highly intuitive empathic starseed
and lightworker. Many starseeds have light encoded frequencies within that are
programmed to be activated at certain stages upon their timeline. Part of my
work is to activate these light frequencies into the earth grid (among other things)
to bring about changes to the planet to allow humanity to shift to into the fifth
dimension. I run worldwide collective consciousness groups to help humanity
awaken from the slumber via the sharing of knowledge and resources, and I work
with various healing Modalities, such as Hypnosis, Counselling, Crystal work,
and Ceremonial Land & Water blessings to name a few. 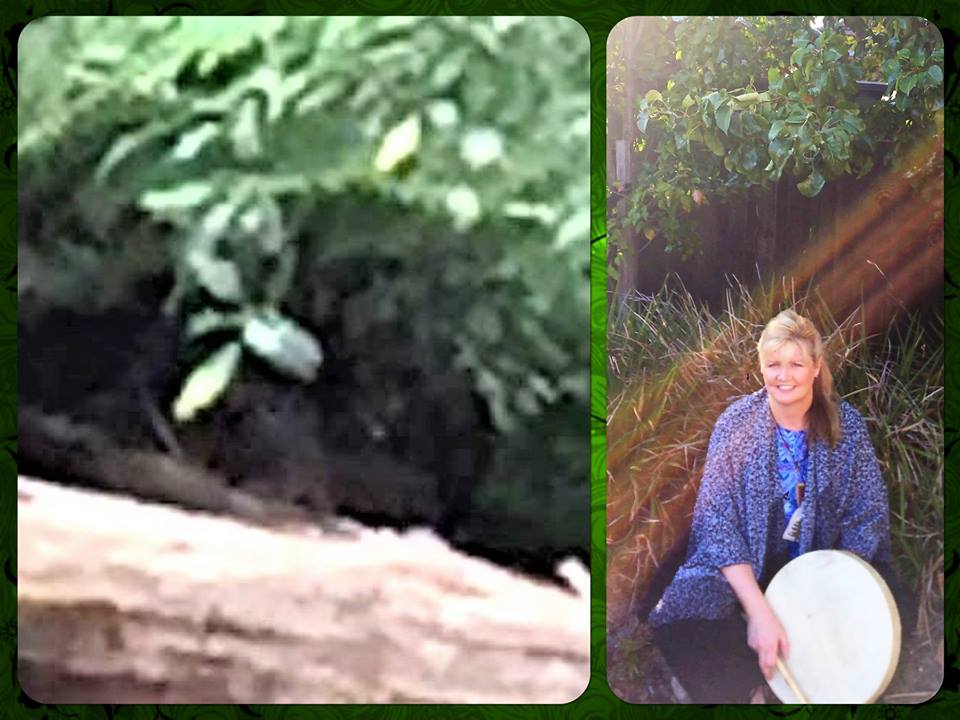 Over the years, I have had many different beings that I have come into contact
with and they are my star family or guides and helpers in our multi-dimensional
universe. Specifically Pleiadian, Arcturian, Jesus Christ, Mother Mary, Angels,
and the Sasquatch. These guides include Ancient Ones and Sasquatch People,
with whom I have formed an alliance, have been having interactions with the
Yowies or Dooligah as we call them here in Australia and my local areas.
I realized the world is not as it should be since I was a small child. I was aware
early to the untruths of the world. In my younger days, I recount paranormal and
unusual experiences that would lead me to believe that some of those
encounters could have involved Yowies as well. I have formed bonds with people
from all over the world who share the same communications from the Sasquatch
People and it is through them that they have cleverly instigated friendships to
help harness the gathering of their people with our human people to be a voice
for them, as we work globally to help raise the frequency of humanity on Gaia at
this time.
In late 2015 I began having more encounters with the Yowie people and was
continuously drawn to nature and exploration of the forest, so on every occasion
my partner and myself would pack our bags and go bush for the day. I was in a
secluded setting ironically called the Bunyip State Forest. The Bunyip is referred
to as a monster of the waterways in aboriginal folklore. In connecting through
spirit was a female aboriginal Elder who began communicating to me about the
Yowie clans on the traditional native land. I saw her telepathically, she was
sitting crossed legged, with a wrapped shawl or blanket around her shoulders.
She was very talkative and she addressed herself as ‘Mother”. She was in
communication with the Yowies and they were all family, she was part of them or
the understanding was she was known to their clan.
On the next occasion when we went back to the property we discovered a walk
track with a bronze statue of a woman sitting crossed legged with a shawl draped
around her shoulder. She was indeed an elder and a known leader of the
Indigenous in the area and the statue served as a monument of her past legacy.
Many times she has connected through me, and one time her presence was
overwhelmingly powerful and she would always bring goosebumps when she
came through as her presence was so strong. As she spoke , she was leading us
back to a specific area, to find the dooligah (yowie) to connect with, she came
through and the hairs on my arms stood upright and she told me to carry a
special stick (a tool used by the Australian indigenous). The tool (stick) would
deliver us to the yowie and offer us protection she said, and they knew we would
be coming.

That is when I saw my first yowie in physical form only about 8-10 meters away
and we had telepathic communication with each other. He was a male called
Sabe-Ceba-Ka (which I found out later). This was the name I was given in
indigenous tongue. We refer to him as Armaridge (as he has been shown to
others I know as well) and he was allowing us to see him for a short time only
(his words), and it was a splendid day. As I watched and felt him nearby, he put a
hypnotic type trance over me. I went into a meditative state there in the forest
and keep conversing with him in my mind. I was telling him that I would be
grateful for the connection and be thrilled to see him and get to know him, that I
loved and respected his home (the forest) and that we are people of good intent,
from the heart, and the connection would be cherished.
The hypnotic trance like state he put me in was intense. I could barely keep my
eyes open and I felt he did this to read my level of fear or intention and to read
my energetic signature. I was not afraid at all. I felt calm and was ready, feeling
no fear, well maybe just a teeny bit, but it was more excitement to see him. I felt I
had protection from my guides from any possible harm. After he told me he was
coming and I would see him, he came thrashing through the heavily forested
area toward me. He was running. I could hear the snapping of branches and
crunching of foliage beneath his feet as he heading straight toward me. My heart
was beating faster but my body felt electric and I was jumping out of my skin
with excitement. When I made eye contact with him coming toward me, he then
turned and ran quickly up the elevated slope of the land. He was heavy set with
thick shoulders and arms, very dark hair, very strong in appearance, and I felt his
energy which portrayed a cheekiness like he was teasing me. He enjoyed that
encounter as much as I did. I will be in awe forever with this experience.
We returned to this forest a few months later to connect with him again. But as
we were driving and I was connecting to him telepathically before we arrived, he
said “we are not there.” The energy of the communication was somber. I felt
deeply saddened, but I could not understand why I was feeling this way. After
driving another 40 minutes or so we had arrived at the place close to where he
lived, and I knew the reason why. The councils of the town’s shires had deforested
the lands. Acres of trees had been cut down; only then could I
understand.
The next year (2016) while attending the first Psychic Sasquatch Spiritual Retreat
and Conference, I had the greatest pleasure of seeing our dearest Kamooh in
Washington while he walked across the road directly in front of us as we travelled
in our vehicle. He then walked straight through a barbed wire fence and vanished
into thin air. We later received his gift of his hair from SunBôw that was given to
him only a day or so before. I keep this with me at all times. Our relationship with the Ancient Ones, the Sasquatch people and the Yowies is one of friendship and
that of an ambassador to receive messages from these wise people to share with
the world.
Now seeing my local clans and meeting more and more faces each time, the
communication is coming through and they are using specific people as channels
to relay these gifted messages for all of humanity to learn and understand as
they have witness many years and cycles of humanity.
One of my messages came through as I sat with a beautiful female called
Tunnika hiding in the bush. She allowed me to capture her image by photograph,
after I had asked her permission, but the decision was hers. On our first meeting
I was with my daughter driving in the hills. We often just pack the car and drive
without any destination in mind. We just head off to the bush or forest for “peace”
time and time to connect with our friends.
We arrived at a beautiful “open to the public” garden. The Garden is on
government property that once was sacred indigenous ground. We took a walk to
a specific area that I felt drawn to. I knew there was Dooligah living in this area. I
could ‘feel’ them all throughout there, many of them. I saw one female and she
has 2 young ones with her either side, and she was admiring my daughter as I
admired her young ones. There were more that showed up in the photos I took.
Tunnika’s energy was very soft and almost shy like and yet she was very
forthcoming with information. She came really close, and just sat behind this big
tree trunk and had one baby each side of her. I can’t believe it – this is real! It is
so far removed from our human reality, they are right there.
On the second visit, I brought my drum and played for the clan and offered
tobacco and burned some sage. I did vocal toning which they love and I asked if
she would like to offer any messages for the Sasquatch Message to Humanity
Book Three and I was ready to take my notes.

The channeled message from Leigh was shared earlier on our website at this link: